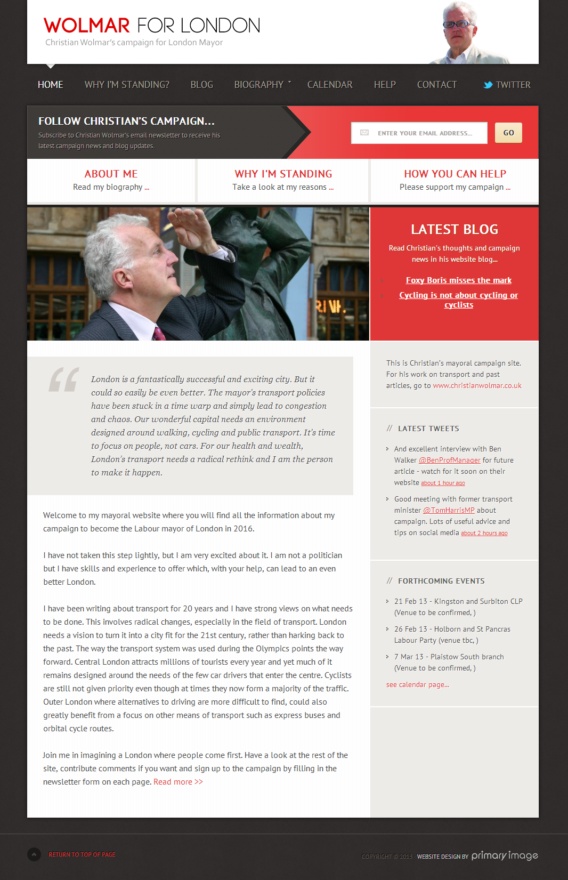 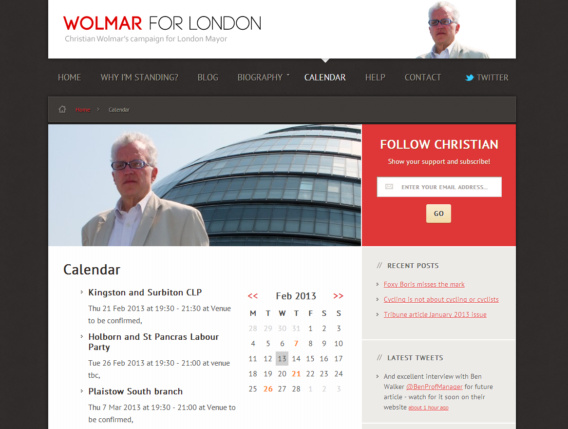 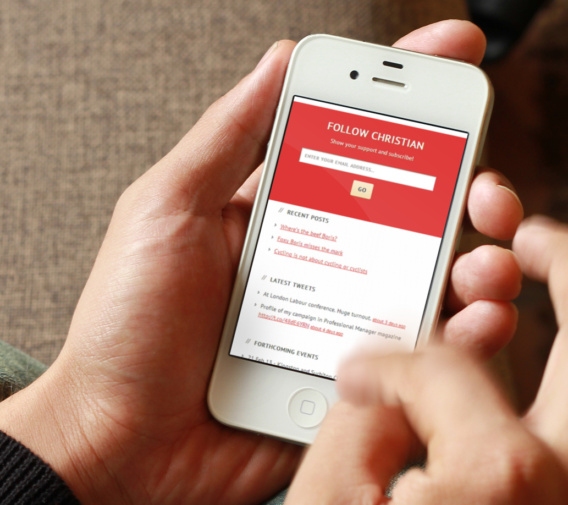 In August 2012 we were asked by transport commentator Christian Wolmar to create a website to launch his London mayoral campaign – called Wolmar for London. Specifically Christian was looking to win the nomination from Labour Party members to become their candidate for the 2016 election.

We designed the site to be bold and fresh-looking, incorporating a modern red and dark grey colour scheme, that would help attract people’s attention and convey a professional image for Christian’s campaign.

The site included a blog, which Christian used to publish his views on various topics. Subscription boxes were displayed on every page, allowing people to receive automatic emails whenever a new blog was published. In addition, a Twitter box was integrated into the site and social “share” links provided. These methods ensured Christian was able to keep in touch with people as his campaign gathered momentum.

Christian updated the site himself using our specially adapted version of WordPress, which is the most widely used website platform in the world. We provided Christian with training via our online tutorial videos.

Users accessing the site using a tablet or mobile device were shown a special (responsive) layout, making it easier for them to view the content.

His campaign went public on 11th September 2012 in a launch article in The Times. However, in an advance copy of the newspaper received via email the evening before, Christian realised his article contained the wrong website link. Within one hour we had the new (erroneous!) domain name registered too and planned to redirect users to the real site. We had also worked through the weekend before to accommodate some last minute changes for Christian, which ensured everything was completed on schedule.

On launch day, the site received over 1,000 visitors and over 5,600 page views, which was a fantastic start for the website. It also attracted good media interest. The second day recorded a similar number of visits too.

Primary Image also manages Christian’s separate transport website and this saw a spike in traffic too – reaching approx 2,000 visitors a day around this time.

Google listed the site within a single day, which meant people searching for Christian’s campaign could easily find the website.

UPDATE: This website was in use for over 20 months until May 2014, when Christian’s campaign team expanded and the website was transferred over to a specialist political platform called NationBuilder (which Primary Image also assisted in setting up and we were asked to design the base templates).

Also see the business cards that we produced for Christian Wolmar.

Mike at Primary Image has been incredibly helpful and creative in establishing the ‘Wolmar for London’ website. He worked hard to establish an image for the new site, and it has won a lot of acclaim from people using it. He understood the precise requirements of such a campaigning website and translated them into exactly the sort of site that was needed.