You are here: Home / News & Blog / Social Media / It's Giraffe, not Tiger Bread! 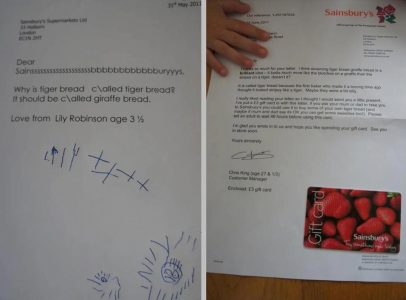 We came across this on Facebook the other day and thought it’s a wonderful example of great customer service.

Click on the image on the right to see story, but basically a little girl wrote a letter to Sainsbury’s asking why Tiger Bread is called its name and suggested that it be renamed Giraffe Bread instead. The fabulous response from Sainsbury’s agreed with her and was written very much in an appropriate style, unlike the usual standard template letters that we’re so used to seeing.

What’s more interesting, however, is that the image was posted on Facebook and has now gone viral, with over 150,000 people “liking” it and almost 50,000 users re-posting the file. Of course, many more hundreds of thousands of people have no doubt seen the letter now too. Due to all this interest, it was then featured in The Sun and other national press titles, gaining a massive positive exposure for Sainsbury’s at virtually zero cost.

Some say it could have been planted, and it may well have been, but nevertheless well done to Sainsbury’s and it really does show the power of social media.

Unfortunately, in the same week, another supermarket – this time Waitrose – found itself in another social media frenzy, but didn’t come out so well! The poster in their Croydon store was meant to say “you count”, but the poster was unintentionally placed behind a window frame, causing one of the letters to be obscured and creating a somewhat ruder message! Again, it has been widely shared on both Facebook and Twitter. Oh dear!