This weekend we travelled all the way from Essex to attend WordCamp UK 2013 in Lancaster, which is an annual meetup for WordPress designers, developers and users.

Ngaire Ackerley started off the day by sharing some useful web design tips. Her points included:

Next up, Jenny Wong explained her methodological approach to debugging PHP and WordPress websites.

After lunch, Nathan Roberts explored ways of making the WordPress admin area easier for users, such as removing the update alerts to save users worrying (as long as the website is being managed by someone else!). He also demonstrated using Advanced Custom Fields, which is a plugin that allows fairly complex layouts and multimedia boxes to be defined, with users able to add their own content through a friendly interface of input boxes. Kirsty Burgoine also did a similar talk on using this plugin and provided an interesting insight into its use.

Next up, and the highlight of the day for many, was the “Wow Plugins” session, where Kimb Jones picked out a handful of useful plugins and showed them live in action. Some of the recommendations included:

The WordCamp sessions finished at 18.00, though the discussion continued late into the night at the Red Lion bar on campus!

Unfortunately we were a little late getting out of bed and missed the first session (!!), but started with Jonny Allbut’s lecture on building intelligent custom themes. He said that in terms of the big trends in web design today, “responsive” is definitely the buzz word, i.e. allowing the website to alter its layout depending on the screen size being used (e.g. desktop, tablet, smartphone, etc).

A useful session followed where attendees could shout out their problems and the panel, including WordPress co-founder Mike Little, Mark Wilkinson and Janice Tye, gave their expert advice.

After the lunchtime break, David Coveney gave a very interesting talk on Unlocking Corporates with WordPress. He passionately argued that WordPress is enterprise-ready, with NATS (air traffic control), The Spectator, The Telegraph blogs site and others used as examples of WordPress being chosen to power high-profile websites. (Interestingly I noticed the Telegraph were still using version 3.4.2!). David also explained that WordPress is great for intranet sites too, however its limitation is currently document management (which is where Sharepoint has the advantage).

For WordPress to power large-scale websites, he said that effective caching and using a CDN (Content Delivery Network) means that even a site hosted on a relatively low-cost VPN (Virtual Private Server) can handle high volumes of traffic. 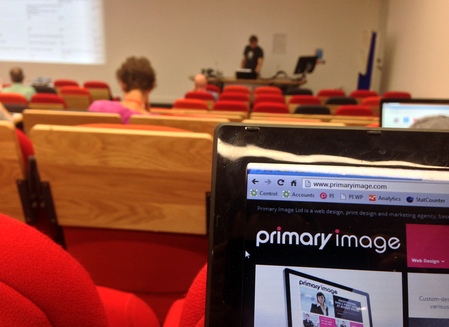 David presented the main benefits of WordPress as:

One thing David cautioned on, though, was that adequate security measures should be in place. One of his websites had around 180,000 malicious login attempts in one day!

This was followed by Graham Armfield, who gave his take on how far WordPress has improved on web accessibility in the past year, such as making the admin interface usable for screen readers and keyboard-only browsing. Despite some recent good improvements in the WordPress core, Graham demonstrated that the new Media Uploader (introduced in version 3.5) is a backward step in terms of accessibility. On the plus side, Graham says that a WordPress Accessibility Group has now been setup and he’s actively involved in pushing for greater awareness and action in this area.

One thing Graham did remind delegates of was the Equality Act 2010, where businesses have a duty to make their websites accessible to users with disabilities.

Finally, Kimb returned by presenting some of his bugbears with the WordPress admin interface and offered suggestions for decluttering the screens, such as removing menu items, boxes and renaming some of the in-built features.

And that was WordCamp UK 2013! It was a thoroughly interesting and educational event, with lots of useful tips picked up, plus met some great people. Thanks of course to the organisers (especially Tony Scott) who did such a fantastic job. We look forward to returning next year, wherever that may be!

WordPress – password protecting the login and WP-Admin via htaccess
Our biggest ever CMS update is here – free for all our customers!

* I should point out there was multi-track presentations running simultaneously, so this only represents my choices, I would have loved to have seen some of the other presentations too! Mike