People don’t like roadworks or engineering work and for good reason; these works often cause major disruption to transport routes and it inconveniences people.

But what if people were fully aware of the works in advance and had the opportunity to change their travel plans? Also, engineering works are never carried out for no good reason, so why not tell people about the benefits of the work taking place and the levels of investment being put in?

Rarely does this happen, but I came across a website the other day that I thought was a great example of communication and public relations.

A13 Roadworks at Stanford-le-Hope

I recently went on a tour of the enormous London Gateway construction site at Stanford-le-Hope, Essex, which will become one of the UK’s largest container ports. One of the necessary works has been to improve the slip roads onto and off the A13 dual carriageway. These roadworks have been underway for several months now and this has no doubt caused disruption to locals, either through tailbacks or diversions.

However, a very useful website has been setup, which explains to people why the works are happening, when they’ll be closures or changes to the road layout, and even allows people to sign-up for email alerts. The site includes a very good level of detail, but strangely it doesn’t actually mention the real purpose of the work, which is to accommodate extra lorries going to and from the London Gateway port. In fact it doesn’t indicate the owner of the website at all, however the £10m of road improvements are being paid for by DP World – the owner of the port. The local authority is only very loosely involved in this project, with the private sector taking the lead.

I think London Gateway are to be commended on their proactive approach to communicating the roadworks to the local community, but this begs the question if they can do it – why can’t local councils and authorities across the country also copy this approach? I’ve only seen a few examples (e.g. Surrey County Council) where public authorities do a good job at communicating roadworks.

When people have good information, they are less likely to complain and also roadworks are less of a surprise, so they can plan their journeys accordingly.

It comes as no surprise that a recent Passenger Focus survey showed that rail customers are generally quite dissatisfied with how engineering works are handled. Just 26% of customers say that they received regular and accurate updates about the work’s progress. They also wanted clearer information about how their journeys will be affected and better details of the start/end times.

Something where the rail industry seems to shoot itself in the foot is how it “sells” engineering work. As one customer said in the survey: “If they made it sound more positive – such as we’re doing this engineering work because we’re trying to speed up your journey – then it would make it sound like a good thing and would help diffuse the situation.” 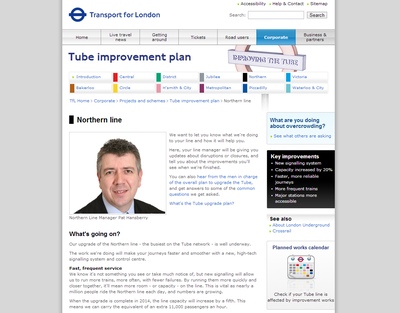 This is not a particularly difficult thing to achieve, but the rail industry rarely promotes the benefits of engineering work.

Take, for example, a poster and website message explaining engineering work taking place at Liverpool Central. It gave a long list of the alterations and saying “The following alterations will apply” and “Trains will not call at this station”, etc. It all sounds quite a negative story, but not once did it say this is part of a £20m station upgrade!

One operation I’ve seen that really does do better is London Underground. They put their poster boards and website to good use, explaining why the works are happening and what benefits paying customers will get. The messages are broken down for each line and their website is really easy to navigate, particularly to see upcoming engineering work.

So why can’t all train operators get better at this? When engineering works are to be carried out, of course the basics need to be put in the customer message, but why not shout out about the good work that is happening? If it’s signalling renewals, tell people that you’re replacing life expired equipment that will improve the reliability of the signalling. If you’re replacing a bridge, say how much it’s costing and why a new bridge is needed. Give people an idea of the scale of the work and why it’s necessary. You could also mention how many man hours the project is taking, how much investment is going in and how long it’ll now be in place before needing to be renewed again.

There’s so much opportunity here, so please councils, train operators and others – inject a positive message into your story. Good communication is key!

Primary Image is a marketing agency, which specialises in the rail and transport industry.